BOAC operated long-distance commercial passenger airline services from the end of World War II until the mid-70's when it was forcibly merged with BEA (British European Airways). The two became British Airways. Those of you familiar with Neville Chamberlain's famous "peace in our time" speech and paper-waving on the steps of an aircraft may have noted the name "British Airways" above the aircraft door.

BOAC was most noted for operating the first ever jet services, using the Comet aircraft. Its most memorable plane, in my opinion, was the Vickers VC10.

The BOAC logo includes the Speedbird device; the callsign of the airline's fleet was "Speedbird" - this was retained by British Airways until in a makeover it was changed to "British". The current BA logo

is descended from the Speedbird, the last vestige of BOAC in BA, apart from some long-serving staff who remember "the old days". 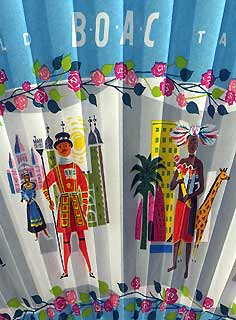 Detail from a give-away BOAC fan.

More info and pictures will be added so check back in a few weeks' time.